This project is the conservation and adaptive reuse of a former convent as an Administration Building for Hennessy College, Young, NSW.

We have managed all stages of this project. We began with measured drawings of all the existing Catholic Church buildings in Young, then prepared a master plan for their future use and development. Then we prepared all required heritage reports, including applications for a heritage grant, Statement of Significance and supporting information for the NSW State Heritage Inventory, Heritage Impact Statement and progress reports to Heritage Office for grant payment claims. This project includes all colour schemes, sketch plans, contract documents, and architect’s management through to completion. Former resident Presentation Sisters (pictured) Sr. Gai Cass, Sr. Helen O’Connell, Sr. Maree Titterton, and Sr. Philomena Sewell, visited the old convent at the re-opening.

The convent in Young was built as part of the Irish mission to bring the Catholic faith to the people of the colony of New South Wales. A timber Catholic church was built by 1863, later rebuilt in stone. Gold rushes at Lambing Flat had subsided, and the Presentation Sisters, who had travelled from County Kildare, opened the convent in 1887. Typically of many convents built at this time across NSW, it was an important local landmark. However, the decade of social change in the 1960s was followed by a wave of Australia-wide closures to convents, as nuns and novices moved to work in the wider community. After the last Sisters moved out in 1989, the empty convent quickly became victim to vandalism and neglect. For years, a local controversy raged about whether the building should be demolished. Now, after pressure from the local Historical Society, an Interim Heritage Order, and two useful heritage grants of $50,000 each, the Catholic Education Office has funded conservation of the building by adapting it as an administration centre for the school, thereby ensuring its re-occupation. This centre is part of a much larger educational project which relocates the Primary school and expands the secondary school into a college which can take in new year 11 and 12 students. Within very tight budget constraints, the former convent now successfully houses teachers and other College staff in an effective and comfortable working environment. Higher levels of natural lighting, artificial lighting, winter heating and harder wearing finishes than would ever have existed in the old convent, are now installed. Kitchen and staff toilet facilities are uncompromisingly modern. All sides of the building exterior are lit for security at night. A new digital PABX telephone network serves the building through concealed cabling. An unobtrusive electronic security system, which includes movement sensors and reed switches, is also installed to provide security to the traditional 19th century door and window fittings.

Convent relics found during the work include water collection lines to an underground well, the old wine cellar under the verandah, and linoleum runner fragments in the upper floor passage.

Although this building is in contemporary use, it also is a heritage building. Its purpose is to celebrate the long tradition of Catholic education. As a result, the office treatments are kept in character with the 19th century origins of the building. Old doors and fittings have been repaired and reused, resulting in savings which paid for older style furnishings. The interior had been severely vandalised but now contains a recreation of the 19th century interior, with new polished timber fireplaces, Victorian style carpet runners, antique style brass locks, and plaster ceiling roses. Instead of the warehouse style banks of fluorescent fittings usually seen in office interiors, the new lights reproduce 19th century fittings. Traditional joinery details that blend with the Victorian interior are contained in a new public reception counter. Timber ceilings are re-varnished, and previously painted timber board ceilings are repainted in a compatible colour. Even the new school sign combines old convent colours with historic lettering styles. Many of the previous colour schemes that existed in the convent, including the earliest colours used, were investigated by paint scrapings and now inspire bold colour schemes which colour-code the Victorian and Edwardian parts of the building. Passers by remark on this new gateway and centrepiece of the new College. Staff have a spacious and interesting place in which to meet. There are also signs that work to the convent has set a local precedent. The surrounding 19th century buildings, until recently dismissed by some people as being useless, are now steadily being repaired and reoccupied by the community. 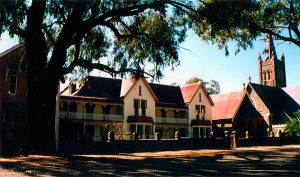 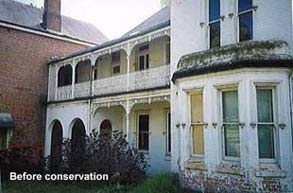 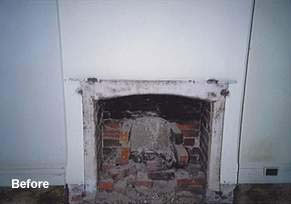 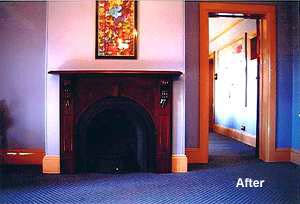 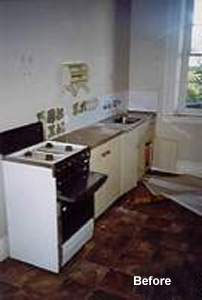 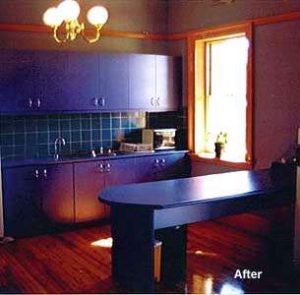 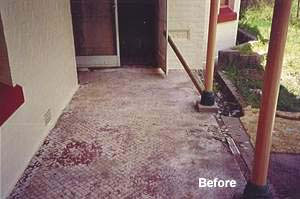 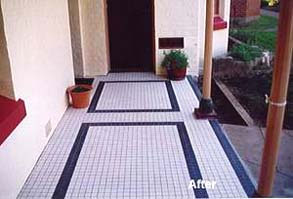 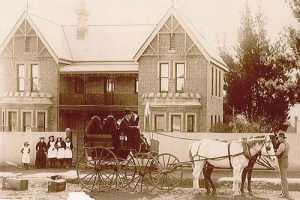